The unmistakable signs of late summer

Fruits ripen, seeds drip, the hours of day and night are balanced.   Mabon Sabbat and Lore

This is a time of year that I both love and find a little sad too.  That point where the unmistakable signs appear that summer is drawing to a close and autumn is chasing its heels.  It’s sad because you know the long evenings are rapidly vanishing and there will now be more night than day and yet it’s still a beautiful time of year.

Each period of the year has its own merits and I do so love to observe that cyclical rhythm of nature doing its thing.  As summer wanes, plants put forth their seeds and berries and animals and insects use the opportunity to feed up for the forthcoming winter.  Consequently, the hedgerows are full of those fabulous later summer structures full of summer energy ready to fuel a new generation. This colourful display is full of warmth and vibrancy and stunning natural structures, just as beautiful as the flowers that precede them. 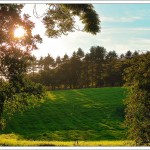 It’s not the done thing to take photographs into the sun, but I do like doing so – in this case, it highlights all the insects in flight. 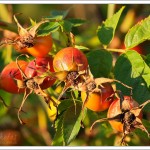 Rosehips, a very typical sign of the end of summer. 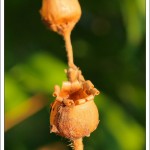 Delicate little seedpods, with their curled back edges, after distributing their contents. 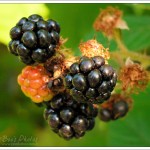 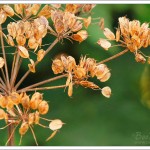 Seed heads from cowslip flowers, also known as Queen Anne’s Lace for the delicate lace like appearance of the tiny flowers. 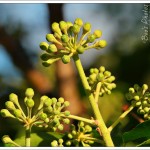 Ivy flowers about to emerge, what fabulous natural architecture. 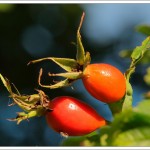 The ripe rosehips are the most fabulous rich colours. 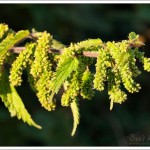 These nettle flowers are exquisitely delicate and complicated.

Recent work in a new material:

I recently discovered a new brand of base metal clays from Australia – the appropriately named Aussie Metal Clay, only recently put on the market in the UK, which I have thoroughly enjoyed working with.  I intend to do a more detailed blog on working with the product, as there is little information out there yet, but I have one or two issues to resolve for myself first.

When I look at new materials or techniques, I often do a lot of research and reading to formulate a good idea of the features of the product to see if it will be suitable for my needs – this is very often blog articles from fellow users who kindly share their experiences.  Consequently, as this product doesn’t feature very much yet, I want to write some more about it and my own findings from making several pieces with it, to make my own contribution for fellow artisans.

In the meantime, in the gallery below are a few of the new pieces I have made with a couple of the medium fire base metal clays from Aussie Metal Clay to give you an idea of its capability, but I intend to write much more specifics in a future post.  [Article now written and the links above take you to it.] 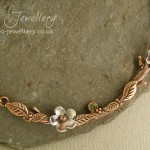 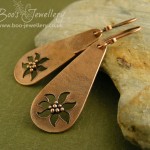 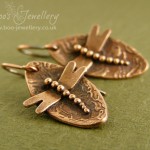 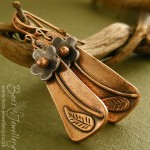 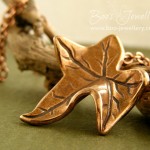 Naturally contoured ivy leaf with a hidden bail on the back. 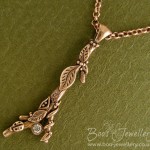 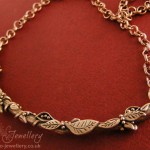 A pocketful of conkers

Due to some of the heaviest rainstorms we’ve had for some time, I’ve not been getting out much during the day for a walk – I start off my day fully intending to, but dark clouds always seem to know when you need or want to be outside and gather accordingly. We had to cut our walk short last Sunday as the heavens opened in a spectacular deluge. There was clear evidence of recent heavy storms, this mature tree had fallen and done damage to the wall and pavement beneath.

It always happened doing the school run – it’s a known scientific fact that weather worsens as school home time approaches – and you can get very wet walking almost a mile in a downpour. The same force seems to ensure that we have lousy weekend weather and glorious Mondays. The last hard winter has given rise to a bumper crop of berries and fruits, these are perhaps the biggest hawthorn berries I’ve ever seen, they were like cherries. I desperately had the need for some fresh air yesterday so decided, as soon as we had a spell of better weather, to just drop what I was doing, put my boots on and grab the camera and what might be a short-lived opportunity. I decided that the break and fresh air would probably do more good than me battling on working. I actually had assorted thinking to do, but didn’t even manage that, I just pottered, taking photos, gawping at the scenery and with a largely empty head. Sometimes that’s just what you need; a bit of mental inactivity can be deceptively productive. There was a distinctly late-summer feel to the vegetation with everything bursting into seed and fruit. I must admit that I do get a tad bored of doing the same walks, it’s times like this that I regret not having a car (I’d have to learn to drive first too) and being able to take myself a little further afield, but I also want to walk where I feel safe and comfortable and I do at least have some open countryside within walking distance of my door, so I can’t really complain. I’ve always had a bit of a fixation with this old gatepost and others like it. I worry that one day it will be gone and replaced with something modern, boring looking and utilitarian. I normally don’t venture down this route alone, as it’s very quiet (and I’m a pussy), but it just looked – and sounded – too tempting.

I usually stick to known routes on my own that are fairly public and near houses and roads, but the dappled sunshine through the trees and accompanying birdsong tempted me to walk the circular route through the two adjacent villages. It’s much quieter than my usual route and I normally only do it with other people, but it looked that bit more attractive than returning and seeing the same things. I’m glad that I did, it was the perfect day for it and I was treated to sunlight filtering through the trees (it wasn’t always sunny, it left me a few times and was alarmingly dark to the north), undisturbed fallen conkers to stuff in my pockets and was serenaded by the woodland birds and very little else. I live in an area that is a combination of industrial and greenbelt – often directly adjoining each other and even where it’s now quiet and no longer worked, the signs of the Victorian heritage are very evident. Even though I’ve shown the prettiest parts of the route, I also have to walk along a main road and through industrial yards to be able to enjoy the nicer green bits.

It was however somewhat breezy, so some of my photographs suffered for it, but you really can’t beat coming home with rosy cheeks, wind-tousled hair, muddy boots and pocketfuls of conkers! I don’t think I’ve ever actually seen a conker fall from a tree, they just appear on the ground, but one of these blighters actually got me hard on the bonce whilst I was gathering others. I did look up sharply, half expecting to see an irritated squirrel taking aim with another.